As a part of the 57th October Salon, the largest regional exhibition of contemporary art, that was held in Belgrade from 15th September to 28th October, Yoko Ono staged her exhibition called “Arising” and she invited all women from Serbia and all around the world who have been victims of gender violence to part this project!
“Women of all ages, from all the countries of the world! We invite you to send your testimony about the evil things that were done to you just because you are a woman. Write it in your own language, write it your own words and write as openly as you like. You can sign your name at the end of it, if you want but you don’t need to state your surname. Just send a photo of your eyes. The testimonies of suffering and the images of the eyes will be incorporated in to my exhibition “Arising” that will be staged from 15th September to 28th October“, said Yoko Ono. 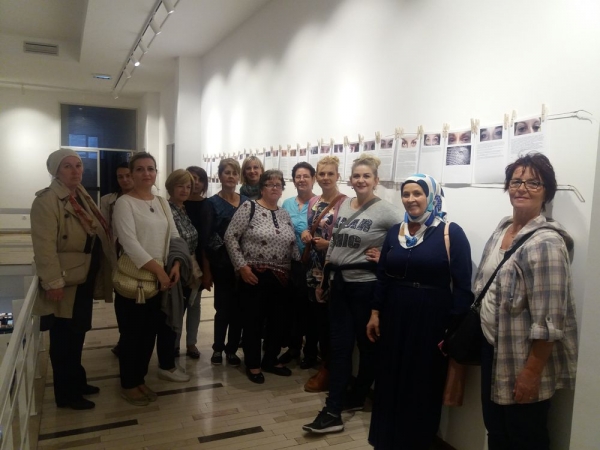 Members and activists of the Association “Sigurno mjesto” have taken part in this project. Testimonies and photographs of women’s eyes were sent to the address of the Belgrade Cultural Center. On the 13th October some 50 representatives of women’s organizations from Zavidovici: „Sigurno mjesto“, “Iskra” Krivaja, “Majska ruža” Mećevići and Krčevine and „Pašinke“ from Pašin Konak , as well as a group of high school students, volunteers of the association visited the Cultural Center in Belgrade and the “Awakening” exhibition.
The activists of the associations were honored by the visit of the Exhibition of Contemporary Art, and the rest of the day they used to visit other sights in Belgrade.
Association “Sigurno mjesto” thanks to friends from Italy who have enabled this one-day trip for over 50 members of the association.